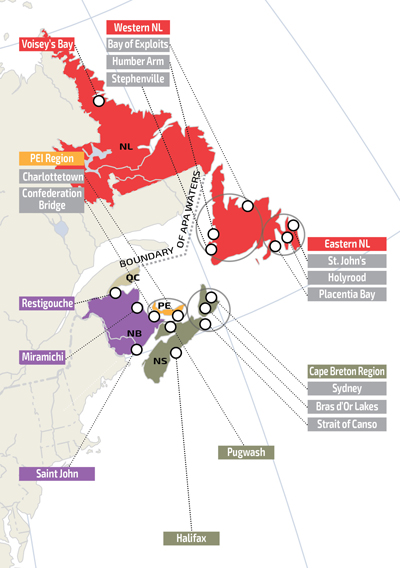 The Pilotage Act has defined the Atlantic Pilotage Authority’s area of operation as all the Canadian waters in and around the provinces of New Brunswick, Prince Edward Island, Nova Scotia, and Newfoundland and Labrador. Within this region, the Authority has designated 17 compulsory pilotage areas. These areas are indicated on the map located on this page.

The Atlantic Pilotage Authority’s jurisdiction contains many other areas that have not been designated as compulsory pilotage areas. In these areas, known as non-compulsory pilotage areas, a pilot is not required on a ship in order to enter or leave the port. However, in some of these areas, the Authority has issued pilot licenses and may be able to provide a pilot if requested. Please contact the Dispatch Centre at 1-877-272-3477 or at dispatch@atlanticpilotage.com to inquire whether a pilot is available for these non-compulsory areas.

How does the APA determine if a port is subject to compulsory pilotage?

The Authority continues to monitor and assess all areas within its mandate to determine any change in factors and circumstances that may have an impact on safety. If such a change is determined to warrant closer review, the Authority will employ an outside facilitator to conduct a Pilotage Risk Management Methodology (PRMM). The PRMM, developed jointly by the pilotage authorities and Transport Canada, uses a proven risk management methodology to assess the circumstances in the area. The PRMM has been used in an effective manner by the Authority on several occasions in the past to determine inherent risks in changing conditions.

The areas of risk examined for determining which ports should become compulsory are: