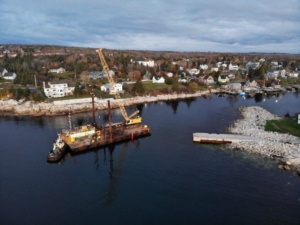 On September 7, 2019, Hurricane Dorian hit Halifax as a Category 2, causing significant damage to the APA’s breakwater and wharf in Herring Cove. The wharf is used as a pilot transfer station.  The wharf was repaired in a matter of weeks; however two 12′ concrete slabs broke off the end of the breakwater, which required a much larger project.  CBCL Engineering was asked to perform a wave study in the area and design a more robust repair of the breakwater that would be partially encapsulated in armour stone and still have public access.  Two Town Hall meetings took place that Fall to explain the repair process. 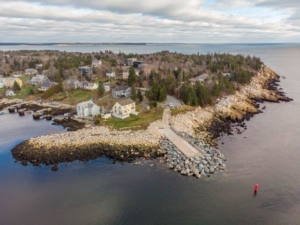 McNally Construction won a bidding process for the repair project and began work in mid-October. The final stones were put into place on December 9, completing the repairs that are expected to provide protection to the Cove and to the APA’s wharf for many years.  To thank the citizens of Herring Cove for their patience and support during this process, McNally and the APA each donated $1,000 to the Herring Cove Community Association, who are fundraising for a new community centre.